​Klamath Falls is located in rural and scenic southcentral Oregon. While Klamath Falls is a smaller community with an abundance of history, it does have many urban amenities of a larger city. Located in a desirable location in the state of Oregon, there is much appeal to living in the area. Here are our top seven reasons why you should live in Klamath Falls, Oregon.

​Klamath Falls has nearly 300 days of sunshine each year and is known as the "City of Sunshine". The Klamath Falls weather makes it very different than many rainy parts of Oregon. Because Klamath Falls is seated in the high desert on the eastern side of the Cascade mountains, it has temperate climate that provides sunshine all year long. While the area does receive precipitation during most of the year, it often comes in the form of snowflakes. Perhaps most appealing, Klamath Falls has all four seasons!

The Abundance of Outdoor Recreation 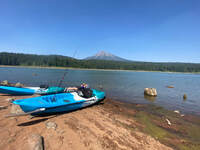 ​The high desert climate in Klamath Falls allows for outdoor recreation all year long, complementing its rural living lifestyle. With the nearby Crater Lake National Park and Cascade mountain range, the summer brings almost any outdoor activity including hiking, biking, fishing, kayaking and so much more. And while the winter brings snow instead of rain, Klamath Falls has plenty of winter sports to offer. For those looking for less intense outdoor activities, Klamath Falls’ location right in the heart of the Pacific Flyway makes it a world-class location for bird watching.

​The cost of living in Klamath Falls is a major attraction to prospective residents. Living expenses, especially housing prices, are more cost-effective compared to many similar nearby cities in the region. This allows residents to enjoy the sunny and dry high desert climate as well as the stunning Oregon scenery with a much lower price tag. Additionally, while downtown businesses are at the heart of the city, owning and operating a business anywhere in Klamath Falls can be much less expensive than other parts of the state.

​While wildfire season in the Klamath Basin does bring the potential for lower air quality, Klamath Falls enjoys clean mountain air with high air quality during most of the year. Since the city is located in a rural area with just over 20,000 residents, the air has less overall pollution. Additionally, with the city right next to the breathtaking Cascade mountains, it's a quick trip to get out of town and into the woods for even fresher air. 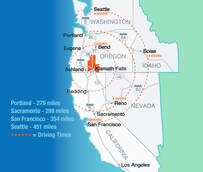 Klamath Falls is centrally located in the southern part of the state of Oregon. It is conveniently located halfway between Seattle and San Francisco, and has quick access to nearby popular areas on the western part of the state including Medford, Portland, and even the coast. Because of the central location, it is also a quick trip to other popular areas on the east side of the Cascade mountains including Bend, Redmond, and Sunriver.